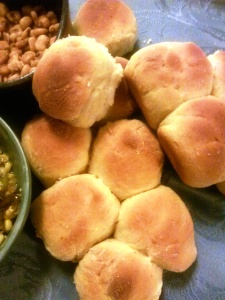 (Originally Posted 10/20/2013) In honor of Columbus Day weekend, this menu celebrates foods that were growing here just fine before any Europeans happened to stop by. If you’re Canadian, you could also consider this a recognition of Canadian Thanksgiving. My personal vote – celebrate both Thanksgivings. You can never have too many.

As with all the menu posts on this blog, I recommend starting with this Note on Recipes.

And if you needed any more reason for an October version of Thanksgiving, it’s also a good time to try out non-traditional Thanksgiving recipes without provoking anyone. I’ll add examples of newfangled Thanksgiving time dishes as I see them appear in November.

And as promised here are some examples. . .