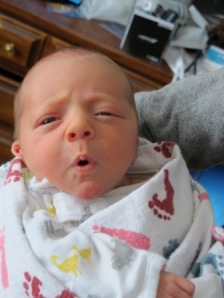 Gratuitous baby picture. He appears in the final paragraphs.

This past weekend was the Vermont Public Radio Commentators’ brunch, when 26 commentators presented essays written on a common theme to members of the VPR Producers Circle (these are the spectacular benefits you can receive if you donate to your public radio station!!).

I’m cheating in the “only food writing” rule of this site by reposting mine here, because it’s not about food. But it’s a lot of effort to go to for a commentary that’s read once for a brunch. And brunches do include food. So I’m posting it here.

The theme was “In Plain Sight”

When my sister got married, she didn’t choose me as Maid of Honor. She chose her best friend.

A guy left in charge of the bachelorette party.

Tim’s version of a bachelorette party was not gender-exclusive. Instead of heading off to Vegas, we stayed in Newbury, Vermont, our hometown. And he had a wholesome objective – to introduce wedding guests to Newbury. . . .through a treasure hunt.

Now, let me assure you, this was not a treasure hunt in which the treasure was hidden in plain sight all along. Our supplies included a metal detector. And we needed it.

We went first to the foundation of the old blacksmith’s shop, the site of a fire in 1913 that destroyed almost the whole town. It was covered by a century’s worth of vegetation, on a slope so steep it seemed impossible that any building had ever stood there.

The next clue was buried beneath a brick archway built into a hillside – which I’m pretty sure is the remnant of a wine cellar from a long-gone 19th century hotel, but as kids we believed it was a stop on Harriet Tubman’s Underground Railroad.

On the seventh clue we trekked out of the village center, through the village cemetery, down over an embankment, headed towards the Connecticut River to find the place where, twenty years ago, the bride and Maid of Honor amused themselves by digging holes to. . . somewhere. Possibly China. Possibly they were making caves.

On clue nine we sat in a lean-to on top of a hill overlooking the river valley, trying to free a note written on sugar paper from a trap that would dissolve it if we made one false move. Once freed, it directed us to the place where the rope swing used to be.

We searched for clues at all the town’s historic churches. We searched barns and fire pits. We fished one clue out of a pond.

The treasure, a chest of wedding presents, was buried in the field where our elementary school held sledding parties. It took eight hours to find.

And it didn’t end there. Last time I saw my sister was just before Easter, when she had my nephew in one hand and a Where’s Waldo book in the other. She was linking Waldo scenes to local landmarks to design an Easter Egg Hunt that looked like it might might last ‘til next Easter.

This is how local history works. You join clues in plain sight, the churches and old foundations, with memories and stories that aren’t visible at all. You create new landmarks. And you always find excuses to go exploring.