Lawrence and I recently hosted a Oaxacan dinner because (and this should be obvious) we got our hands on a large container of dehydrated grasshoppers – or Chapulines. Having a big batch, seasoned to be super tart and salty, meant we could add them to dishes at will (or not, as was the case for most of our guests). You know how in some southeast Asian cuisines chopped up peanuts taste good on everything? Well. Salty, crunchy, tangy, protein-y grasshoppers seem to work on dishes from Oaxaca. Based on our admittedly small sample size of one dinner.

Because I work at a bookstore, and there is no reason to work at a bookstore if you aren’t going to take the opportunity to read the recipes in really expensive cookbooks, we turned the dinner into a perusal of the thick, hot pink and orange, Mexico: The Cookbook  by Margarita Carrillo Arronte, from Phaidon press. 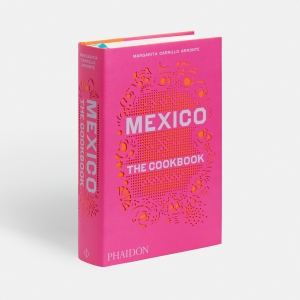 This cookbook made a splash as a hefty compendium of traditional Mexican recipes, promising to give home cooks all the information they needed to explore this cuisine. NPR broadcast an extensive piece on the effort, and it came across my radar again in the book review sources (such as Publisher’s Weekly) I use at he bookstore.

Phaidon describes Mexico as the “definitive bible of Mexican home cooking”, which is a wonderful bible to have . . . until you try to actually use the recipes. They are so full of editing errors that it feels miraculous when a dish succeeds. Lawrence cursed the recipes. I cursed the recipes. We both went online to figure out what the recipes meant to say. One of us threw things, I won’t say which one. These are errors like giving the wrong temperature for candy (your sugar syrup will do nothing candy-like at a mere 217-degrees Fahrenheit), cup and gram measures that don’t correlate (I split the difference), adding all of one ingredient in one step then the “remainder” of it two steps down. If we knew anything about Mexican cooking we might be able to adjust more smoothly. Then again, if we knew anything about Mexican cooking, we’d find even more mistakes.

I probably don’t need to point out that when you get a cookbook to learn about an entirely unfamiliar cuisine, and the first two recipes you try have big problems in them, it’s hard to keep going (unless, of course, you’ve promised a dinner party for a dozen people who are arriving at your door in three hours).  It’s especially problematic when the cookbook is designed to fly only on the strength of its recipes – with very little text given to the intricacies of Mexican cuisine, beyond the introduction. 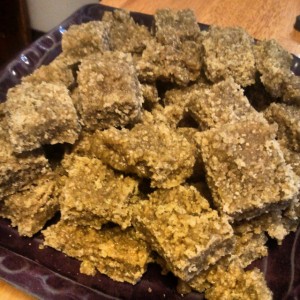 I’m pretty sure they meant for me to bring the sugar to 317-degrees Fahrenheit.

The best cookbooks are doing something very difficult – they combine technical precision, clear instruction, interesting perspective, and often very elegant / funny / poignant / political / smart writing. It’s not easy and we probably don’t give the great cookbook authors the credit they deserve for being great writers. I agree with this quote from David Lebovitz about the making of his book My Paris Kitchen (which has perfect chicken recipes, and I don’t even like chicken)

“There’s a lot of talk about whether food blogs are overtaking traditional cookbooks. What’s changing – in my view – is that people are looking for something else in a cookbook – not just collections of recipes, which can be found online, but a storyline that carries the book. I read blogs when I’m sitting in front of my computer, but I love settling into a chair (or cozy bed) with a good cookbook, and reading all the stories that accompany the recipes.”

“Fancy Desserts, with its recipes connected like a mystery novel, can be confusing, illogical, hilarious, disarming, vulnerable, and intimidating — and I could not put it down.”

Plus, the damn measurements are correct. And the temperatures. And. . .

Or, at least, we hope so. Because we hope the reviewers have tried the recipes, not just skimmed through them. (In the Edward Lee case, yes, he had).

It’s not easy reviewing cookbooks. Doing an excellent cookbook review involves reading the book, as in any book review. It also means cooking the recipes. That in turn requires some time, money, patience, skill in the kitchen, willingness to ruin dinner, etc. Plus familiarity with the genre (yes, I’m calling this a genre) that lets a reviewer place each writer’s efforts in good context, which again – the cooking effort to support it. It’s important to give the best reviewers credit too. Where is the New York Review of Books for cookbooks? We need one. 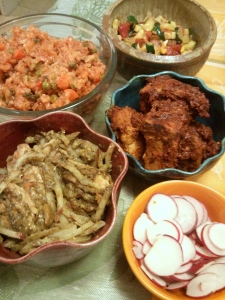 Once we sorted through the recipe edit frustrations, to be fair, the Mexican dishes were vibrant and delicious.