The thing with radio commentaries is that you can’t use footnotes. I want footnotes for this commentary because it’s about a report and, really, it’s only fair to give folks access to that report. Also, it’s interesting to read the original language because really what we’re talking about here is when to use strong language. In the case of the government, strong language means such shocking (shocking!) statements as “eat less refined sugar.”

The Report: Scientific Report of the 2015 Dietary Guidelines Advisory Committee

These updates reflect new scientific findings and, in some ways, recent changes have also reflected a worsening national diet. In 2010, the guidelines shifted their emphasis from staying a healthy weight to a focus on losing weight (2). Now, in 2015, we’re looking at stronger recommended language about eating *less* of certain things – upsetting groups in the “less” category, primarily non-lean beef, processed meats, and sugar sweetened foods and beverages (3).

Official U.S. dietary guidance has for a long time tiptoed around the issue of “less” by using terms like “moderation.” But it’s hard to define moderation when the norms are dramatically off kilter – like, for instance, the “empty calories” category – which includes added sugars and certain types of fats. 90% of the population exceeds recommended limits for empty calories – nearly all children do (4). No one is modeling moderation here. Basically everyone needs fewer empty calories. Period. But the Sugar Association’s immediate response was to remind us that “Sugar consumed in moderation… is an important part of a healthy diet and active lifestyle.” (5)

Now, it would be easy to dismiss the sugar industry’s reaction as crass self-interest if we weren’t all so good at re-framing health messages of less into permission for “more.” More is active, it feels like we’re doing something about our diet. So I’m always ready to try recipes that add more leafy greens, bitter flavors, or protein. I’d rather sprinkle walnuts on oatmeal or have kale chips with my burger than eat less at breakfast or lunch.

Even trends that begin as less can turn into more – like my brief flirtation with less gluten that rapidly turned into baking experiments like German Chocolate Cake made with teff flour (6). Teff, a gluten free grain, is delicious. The cake was delicious. And I had an excuse for more dessert.

Then there’s using more exercise to justify even more calories, my personal specialty. I once gained weight on a long distance bike ride, pedaling 60 to 90 miles a day, then sabotaging it all at dinnertime.

Whether we’re a lobby group or just someone adding another handful of kale to dinner, we’re not a nation inclined to eat “less” of anything. And while we do need to consume more produce, whole grains, calcium, potassium and iron… we need to offset those additions with less of something else (7). And that’s a major change for everyone.

(1) This is not the same as the final guidelines, which are decided by the Departments of Health & Human Services and Agriculture. This is an independent body making draft recommendations, which traditionally track closely with final policy but not necessarily. Here is who the committee was.

(2) You sort of have to compare the content of the earlier guidelines and the 2010 ones to get to this summary statement. However, the overview of the 2010 Guidelines signals the change by announcing a chance in who is supposed to use this guidance.

Dietary Guidelines recommendations traditionally have been intended for healthy Americans ages 2 years and older. However, Dietary Guidelines for Americans, 2010 is being released at a time of rising concern about the health of the American population. Poor diet and physical inactivity are the most important factors contributing to an epidemic of overweight and obesity affecting men, women, and children in all segments of our society. Even in the absence of overweight, poor diet and physical inactivity are associated with major causes of morbidity and mortality in the United States. Therefore, the Dietary Guidelines for Americans, 2010 is intended for Americans ages 2 years and older, including those at increased risk of chronic disease.

(3) For example (and there are many examples) “Attack on Meat Has Industry Seeing Red” from Politico.

(4) The documentation for the 2015 recommendations (which you can explore online) is chock full of statistics on current dietary patterns, and also connects through to a background body of research that explains how they reached their conclusions on what’s “healthy.”

These charts offer a very quick snapshot of the sort of patterns they’re talking about. What surprised me was in how many instances we’re off by 90-100%. Hence the statement that there is scant evidence of moderation. See also my earlier commentary on how dramatically our perceptions of what is “normal” in food can swing in a short period of time.

(5) Sugar Association Statement On her blog Food Politics, Marion Nestle (who is definitely not showing any empathy for the sugar industry any time soon) quotes the same association in reaction to a recent World Health Organization recommendation on reduced sugar. 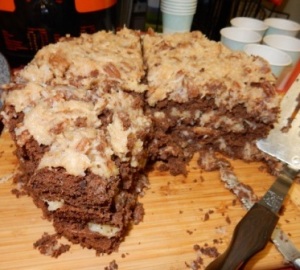 (7) That isn’t just common sense, people are tracking this, too. Here’s a story from The Atlantic “The Paradox of Obesity and Produce” and a USDA report on how just adding vegetables into our diet alone isn’t the solution, it depends on how you add them.