For the second week of Moroccan meals, I added more strong flavors to the list – Moroccan food doesn’t have just one or two signature tastes, it has a whole slew of them. Here are a few new things to try based on this week’s menu. 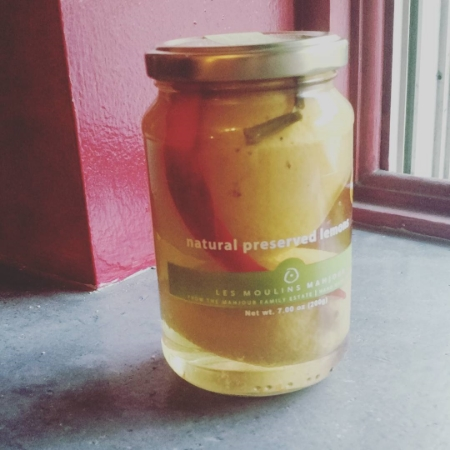 Preserved Lemons: Preserved lemons are briny, sharp (although not nearly as sharp as eating a whole fresh lemon) lemons that have been preserved in lemon juice and salt. You can buy them at specialty food stores, including Hunger Mountain Co-op, and you can also make them. Here is Paula Wolfert’s Recipe – Posted on Leite’s Culinaria. You can make a cheater’s version for using in something like a soup or stew by slicing the lemons relatively thin (not paper thin, more like a generous 1/4 – 1/3 inch), freezing them overnight, and then thawing them and salting them and letting them drain for about an hour before proceeding (this trick I got from Claudia Roden’s cookbooks).

Once you have preserved lemons you can make a chicken and lemon tagine, like this one from Saveur that was the starting recipe behind the tagine on this week’s menu.

You can also make my Moroccan corn chowder, which takes the spices from the tagine and applies them to corn chowder instead. I sauteed 1 diced red onion, 3 1/2 cups of corn kernels (I cooked fresh corn on the cob for 3 minutes then cooled it down and removed the kernels) in a combination of oil and butter and added:

Then simmered it with about 2 1/2 cups of good vegetable stock (I used the de-kerneled cobs as part of making my stock; you could also use store bought), then stirred in 1 cup milk and 1/4 cup cream (again, these are approximate) – warmed it up and adjusted salt and pepper to taste. Delicious.

Corn Cobs – I once heard someone refer to them as “vegetarian soup bones” and took it to heart.

Dukkah Spices – Technically, dukkah spice mix is Egyptian, not Moroccan. Fine. I’m about to note more Moroccan spice mixes below. But Dukkah spices and Cauliflower went so well with the Thursday night menu that I fudged it.

Dukkah spice mix is a combination of spices, toasted nuts, and seeds, ground together. One thing I have a new appreciation for after this week’s cooking is whole coriander seeds, toasted then ground at home. The fragrance is wonderful, familiar and a little exotic at the same time. And since my cilantro bolted almost immediately in my garden, I should have homegrown coriander seeds available – I’m going to check later this weekend. They go into this blend. I used David Lebovitz’s recipe for the Dukkah mix, which I got from his My Paris Kitchen cookbook, he also has it posted online here.

I use this Orangette post for Cauliflower roasting, and while I did not add the parmesan they mention to this version, I recommend the original recipe for fall weather. To make the Dukkah spiced version, sprinkle the cauliflower liberally with spice about 2/3 of the way through roasting, then again when you take it out.

I wish I had cauliflower leftovers to eat for lunch today. But I don’t.

Salad of finely grated carrots, oranges, salt, and a sprinkle of orange blossom water. Goes well with the cauliflower.

Moroccan Spice Blends: I did not have time this week to use the full range of the many Moroccan spice blends that can season stews, tagines, meats, really anything. That does not mean I don’t have a whole list of recipes and blends to try. For example, whenever I go to Colorado (admittedly this has only been twice in my life) I stock up at the Savory Spice Shop. They introduced me to Berbere spice. If you’re curious what might go into some Moroccan style spice blends here are examples from them:

If you want to try blending some of your own spice mixes, here are some recipes for that, too:

And for more Moroccan recipes, check out last week’s post, which includes Chermoula sauce and a chicken pastry you really shouldn’t miss. . . .