(Posted 10/4/15) Posting has been spotty on this site, I admit. On the other hand, posting has been quite robust on my other site, Hel’s Kitchen . . . and this post is derived mostly from the Menu Notes blog there. If you ever get bored of lack of recipes here, I suggest Hel’s Kitchen. They’re even better because over there, the recipes come with takeout (provided you live near Montpelier).

The first thing to consider for a Moroccan meal would be Champagne. Because in the movie Casablanca, they drink a lot of Champagne – I watched it again to verify. Also, angostura bitters sugar cubes are a tremendously easy recipe that, when added to a flute of Champagne, make a sort of Champange cocktail. The recipe is here.

Next to consider is chermoula, a lemon-y, pesto-ish sauce that goes great on fish, vegetables, meat. . . there are many recipes for chermoula and here are a few:

Preserved Lemons and Moroccan Corn Chowder: Preserved lemons are briny, sharp (although not nearly as sharp as eating a whole fresh lemon) lemons that have been preserved in lemon juice and salt. You can buy them at specialty food stores and you can also make them. Here is Paula Wolfert’s Recipe – Posted on Leite’s Culinaria. You can make a cheater’s version for using in something like a soup or stew by slicing the lemons relatively thin (not paper thin, more like a generous 1/4 – 1/3 inch), freezing them overnight, and then thawing them and salting them and letting them drain for about an hour before proceeding (this trick I got from Claudia Roden’s cookbooks) and then use after a day or two.

Once you have preserved lemons you can make a chicken and lemon tagine, like this one from Saveur. You can also make my Moroccan corn chowder, which takes the spices from the tagine and applies them to corn chowder instead. I sauteed 1 diced red onion, 3 1/2 cups of corn kernels (I cooked fresh corn on the cob for 3 minutes then cooled it down and removed the kernels) in a combination of oil and butter and added:

Then simmered it with about 2 1/2 cups of good vegetable stock (I used the de-kerneled cobs as part of making my stock; you could also use store bought), then stirred in 1 cup milk and 1/4 cup cream (again, these are approximate) – warmed it up and adjusted salt and pepper to taste. Delicious.

Once you have eggplant chermoula and a soup with preserved lemons on your dinner menu, adding a few additional salad and spread dishes gets you most of the way to a nice feast. Here are some options:

And for dessert. It’s unlikely to be a traditional Moroccan dish, but here is what worked for me: Buttermilk Panna Cotta with Mint Syrup.

Finally: Chicken B’Stilla is. . . probably not a dish you should try because you will want to make it again and again and it is both unhealthy and time consuming. On the other hand, it is a delicious pastry heavy on both chicken and confectioners sugar. A recipe from Fine Cooking is found here. Oh delicious. I can’t even write about it, I just want to go eat more of it. It’s in here because it is so wonderful, if you’re doing this at a dinner party I would ignore the rest of the items listed here and just do that with a simple green salad. 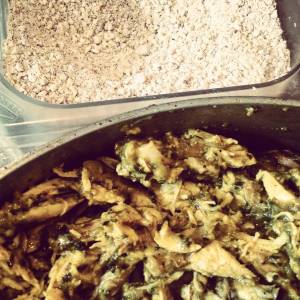