The fourth post in the notes from the Caribbean series.

I’m not going to say that Vermont lacks in produce diversity (we’ve got a lot of different apples, that much I know), but it’s one, relatively cold, bit of the world. The world beyond my home is huge and full of food. Adam Leith Gollner gives a hint of the possibility in the introduction to his book The Fruit Hunters:

. . . Our whole planet is brimming with fruits that are inaccessible, ignored, and even forbidden. There are mangoes that taste like pina coladas. Orange cloudberries. White blueberries. Blue apricots. Red lemons. Golden raspberries. Prink cherimoyas. Willy Wonka’s got nothing on Mother Nature. The diversity is dizzying: most of us have never heard of the Araçá, but Amazonian fruit authorities say there are almost as many types of this yellow-green guava relative as there are beaches in Brazil. Within the tens of thousands of edible plant species, there are hundreds of thousands of varieties – -and new ones are continually evolving. Magic beans, sundrops, cannonballs, delicious monsters, zombi apples, gingerbread plums, swan egg pears, Oaxacan trees of little skulls, Congo goobers, slow-match fruits, candle fruits, bastard cherries, bignays, belimbings, bilimbis and biribas. As Hamlet might’ve said: “There are more fruits in heaven and earth, Horatio, than are dreamt of in your philosophy”.

I can get my hands on wonderful ingredients that provide a taste of far off places – dried Sumac, canned Amarillo pepper sauce, Sichuan peppercorns, mastic, real Champagne. But produce? I’m not even sure I know what a pecan tastes like, since I’m 90% certain that what I’m eating up here does not taste like what I ate one summer in the pecan groves of Louisiana (although there’s an equal chance that the Drive Through Daquiri stands affected my perceptions for the entire four day trip). And pecans can’t be that difficult to ship. I’ve stalked the “Winter Market Digest” from Los Angeles’ KCRW and I seriously doubt I know what a good orange tastes like, to say nothing of the pink cherimoya. Plus, it’s really really hard, even impossible, to recreate the complexity of these fruits and vegetables. Flavorists have been trying it since 1851. You can see how they’re doing by sampling a box of Jelly Bellies.

I wanted to try lots of fresh produce when I was in the Caribbean. I do seem to always pick a time of year that is not peak harvest, however. One day I will synchronize my vacations appropriately. Some of what wasn’t in season, I found in other forms. . . like Golden Apple Ice Cream. Golden Apples are not apples in this context – they look like little papayas (according to photographs) – and the ice cream tasted like very concentrated watermelon. I also found out that fruits I know to be very sweet in their familiar non-fresh forms (e.g. juices) are pretty darn tart in their unadorned state – passion fruit is in this camp, although very fun to scoop out of the shell with a spoon. It did not bother me that the insides looked like yellow frog’s eggs. Honest.

Here are three produce items of note, with recipes:

I took a keen interest in determining the best callaloo soup in the Windward Islands. It turned out to be at Coco’s, the restaurant that claimed to have the best callaloo soup in the first place, which was a surprisingly straightforward answer. “Callaloo” means different varieties of dark greens depending on where you are in the world, here it meant the leaves of amaranth or taro bush.

I attempted to recreate the flavor of callaloo soup at home, and while I didn’t get it spot on, I did make a tasty modified spinach soup that gets you closer:

In a medium saucepan combine:

Cover and simmer for 10 minutes, then add:

Cover and simmer another 10 minutes, until spinach is all wilted and the chokes are soft.

The breadfruit I saw growing were the size of petite watermelons, the fancy kind that they have at the farmers’ market, except these grow on trees. Which strikes me as dangerous, but this is also a place where coconuts grow, so I suppose people are used to being attacked by large and heavy fruit. As the name implies, breadfruit is starchy. It first came to St. Vincent and the Grenadines as an option for feeding slaves cheaply. The Mutiny on the Bounty, in fact, was caused by breadfruit – Captain Bligh’s men went ashore in Tahiti on a breadfruit collecting expedition and intra-ship relations deteriorated soon thereafter. This history is both indicative of what was happening along those trade routes, and also of the fact that breadfruit is astoundingly good in both nutrition and yields – the horticulturists got that part right. The national dish of St. Vincent today is roasted breadfruit with fried jackfish. Also, there’s a Breadfruit Festival during Emancipation Month (August) every year. The advertisements for this festival promise that “The dishes include but are not limited to breadfruit cheese pie, breadfruit puff, pizza, lasagna, breadsticks, quiche, sweet and sour candy (blossom). There are also breadfruit drinks available.”

Breadfruit is a sort of blank palette, cuisine-wise. I had salt roasted breadfruit at Auberge Grenadines and topped it with the rum and peppercorn gravy that the beef came in and, let me tell you, the starchy fruit covered with that rich delicious gravy was delicious. Japanese Sweet Potatoes give a sort of similar sense of dry starchiness with a hint of sweet. However, the breadfruit has a different texture inside – I looked up botannically how to describe it, but trust me it’s complicated, so just picture how a pineapple is textured inside – like that. When you plan to smother a dry roasted starchy fruit in gravy, you want this texture to catch the gravy up. I could not get my Japanese Sweet Potatoes to behave in the same way. I’ve also learned that while there are whole campaigns to transform breadfruit with preparations like rum & peppercorn gravy, there is no campaign to turn other produce into something like breadfruit so that you can then turn around and transform it back into something delicious.

Oh how I love soursop. It wasn’t technically in season when I visited but it was good enough for me. It’s a big soft ugly fruit. Inside the thick green skin you’ll find white flesh with black seeds, like a watermelon seed perfectly formed for spitting but ten times larger. Yes it’s sour but it’s not acidic* or tart. Also yes, acidic and tart are subsets of the taste “sour”. Think of a sour flavor, then think of fruits that don’t have that tartness – roasted pears, for example. The flavor was mild, but on the very ripe mango end of the tropical fruit spectrum. It’s the texture, though, that really got me. I’m going to tell you it’s like eating BBQ with your hands – the way the meat falls apart and juice runs down your arm and it’s so satisfying – and you’re going to think I’m ridiculous. But I’m not. Soursop is often marketed as similar to jackfruit and jackfruit, my friends, is a trendy vegan meat substitute because of it’s texture. So it’s not just me.

Soursop might not be easy to get around here but you can find canned green jackfruit for vegan meat experiments. I first encountered such a recipe with the vegan fish sticks in Justin Warner’s The Laws of Cooking And How to Break Them. It’s mainstream now and we know this because Splendid Table did a segment on jackfruit, and it comes with recipes.

*According to the Internet, where a bunch of people are worried about acidic foods in their diets, a soursop is slightly alkaline and far less acidic than something like a strawberry. I believe that Wikipedia’s soursop entry is wrong about this issue and if I knew how to correct it, I would.

A Note On Carriacou Botanical Gardens

While wandering the Windward Islands looking for fruits to eat, we naturally wandered into the botanical gardens in Carriacou – which the tourist guides listed as a major attraction currently undergoing repairs. “Undergoing” might have been optimistic. 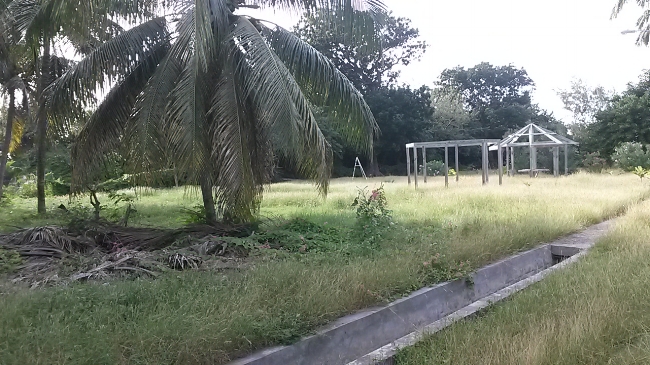 I don’t know that it will be a tragedy if this particular botanical garden is never again tended to, but it still felt sad. Pause to imagine: these islands were a doorway between two very different botanical worlds. Transatlantic currents, and the prevailing winds, put early ships from Europe into the southern Caribbean, carrying plants to and fro. Pretty quickly, land was transformed into sugar plantations and monoculture. There’s amazing diversity. There’s diversity collapse. More broadly, as two hemispheres mingled, tomatoes met onions and there was sauce. Apples met pecans and a great pie rivalry was formed. Bananas met peanuts and Elvis got his favorite snack. Vanilla met coffee met cacao and eventually we had frappes. Someone invented rum. And one day it too was added to frappes. Everyone learned about maple syrup. There were plants that aren’t food – there were textiles, medicines, and many beautiful flowers. There were also invasive plants and species extinction. The humans building commerce around these plants opened Pandora’s box – and I mean that in the classical sense of all the world’s evils being released. Remember the Garden of Eden? That didn’t end very well, either. There’s discovery and wonder and greed and evil and chocolate – I’m not a botanist but the need for history-rich gardens feels compelling.