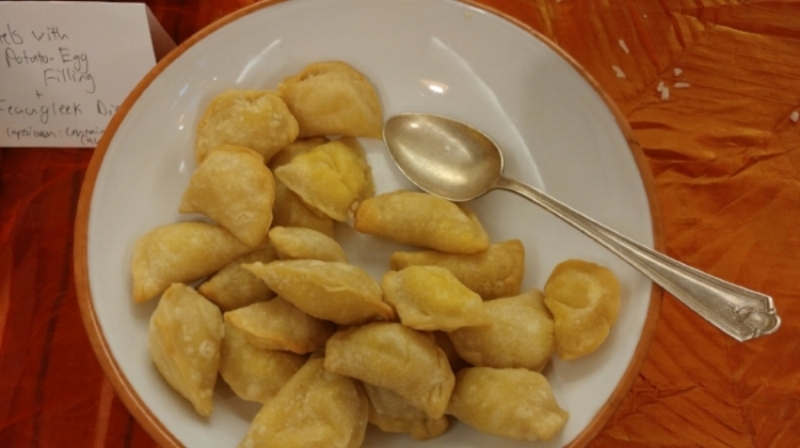 Pastels – Thank you to Beth Liberman for photos

This past weekend I catered a Cochin-inspired Indian dinner for a presentation by Professor Barbara Johnson at the Beth Jacob Synagogue in Montpelier, as part of their Culture & Cuisine series. You might recall this series from the foray into 1905 Western Russian food this past fall. Well, this time it was Jewish food from Cochin, a city in the Kerala Province in very southern India.

“Indian” food covers a whole lot of different food – it’s a big country. In Kerala province it isn’t even traditional to have naan (don’t get me started on what angst this caused me, and kudos to the attendees of Sunday’s event because it was the first time I failed to serve naan at an Indian dinner and no one complained . . . if you complained to each other about the naan-absence I don’t want to know). This menu also needed to reflect Jewish Cochin food and needed to be vegetarian . . . which is wonderful because I like a chance to try out new things and the more restrictions the more likely they are to be new for me. And by doing this, we’re not only sampling some of the diversity of food available today, we’re also investing in the future because the more different dishes we try out today, the more inspiration we’ll have for creative new dishes in meals to come. Traditional foods, current foods, future foods – you see how it all comes together? Really it was very important to stuff ourselves as much as possible Sunday evening. This sort of foray only works when you have a group of eaters who are happy to play along.

I was helped in my menu-making by three resources:

The only problem with using mostly books for this menu is that I do respect copyrights and won’t simply re-type everything here. BUT that’s okay because, trust me, I’ve got lots of ideas to share for anyone who wants to explore Keralan or Cochini food on their own. 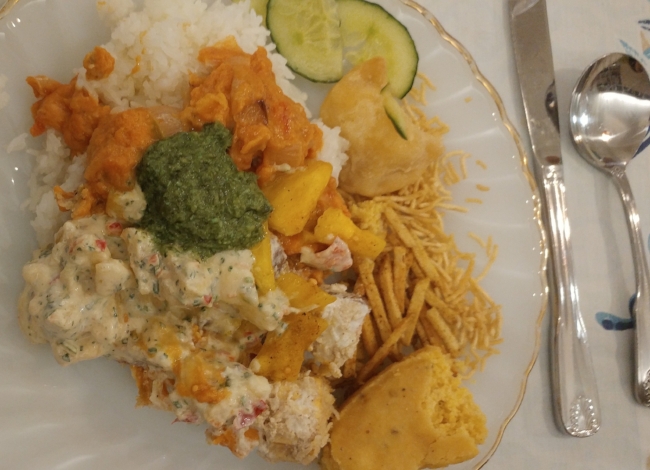 Before We Get Started. . . Stocking A Few Indian Ingredients:

The line between a catering assignment and an excuse to go shopping at Gagan Indian Grocery Store next to Al’s French Fries in Burlington is vanishingly thin. You really should visit. Here’s a list of the sorts of delicious items you will find there, with recipes for trying them out:

When I started typing I’d planned on a short list, as I type I’m realizing that “short” isn’t going to happen unless I cut myself off right now.

Now that we’ve stocked some ingredients to have fun with, here are a few  articles on the particular theme of Sunday’s dinner

If you are looking for Southern Indian foods, here are some flavors and ingredients to expect: bananas / plantains, coconut, fruits in savory dishes, yogurt or buttermilk, fish, tamarind, and rice. The “rice” extends to rice-based breads, which are what have bumped naan from the table. Dosai and appams are two examples of the latter and appear below.

Pastels – Pastels are a key food in Cochini Jewish cooking. Everyone seems to agree on this fact. No one seems to agree on the best recipe. They’re similar to samosas, but folded more like a pierogi. I made mine with a simple filling of potato, hard boiled egg, and turmeric (fresh is best). I made the dough with 3 cups of flour, ½ tsp of salt, 1 egg and a can of full fat coconut milk. Then you fold them up pierogi-style and fry them (I have a cast iron wok that works well for that part). However, if I had seen this pastel recipe from a Keralan blogger earlier, I would have used it instead.

Fenugreek Dip or Hulba (for pastels) – The Fenugreek dip from Spice and Kosher I will reprint – it’s so simple, and so tasty, I’m sure the book’s authors would have wanted you to have it:

2 green chilies (I omitted these on Sunday)

Soak fenugreek overnight in water. Drain water – you should be left with a paste. Put all ingredients through chilies in a blender, blend until smooth. Add lemon juice until frothy dip (don’t add so much that it is watery). Add salt to taste

Spicy Banana Chutney – I believe this is good on everything. I like to use it with South American style food too. I do it by taste: you start with a cup of Butterworks whole milk plain yogurt and puree it with a whole Hungarian wax hot pepper (or more. . . or less), about a cup of cilantro, and a generous pinch of salt. Adjust the ingredients to your desired balance. Then you small dice ripe bananas, mix it up, and have a very delicious hot fresh chutney.

Coconut Dal – A simple dal, there’s no reason not to have it around all the time. It’s my own recipe, but I came up with it while trying to cook Keralan food, so I figure it’s practically authentic. Sort of. A lovely introduction to using fresh curry leaves, which are often available at Hunger Mountain Coop.

Fennel Shortbread – I got this Fennel Shortbread recipe from the author who wrote Made In India, a cookbook that was very popular last year and advanced all the way to the final round of the Piglet Tournament of Cookbooks. It’s a lovely way to have the taste of fennel without needing to track down the candied fennel seed mixes (unless you go to Gagan’s, of course, where those mixes are easy to find). There’s an error in the online version of this recipe which is a simple one – they forget to instruct you to add the fennel seeds. Add them. I pulse them in a spice grinder first, just to break them up a smidge but not all the way to powder. I also swap out ½ cup of the regular flour for ½ cup of gram flour.

These next two recipes did not appear at Sunday’s dinner; I still feel conflicted about having left them out (ultimately the pastels took so darn long, I had to prioritize). BUT they are even more relevant to share after the fact because they’re both a good way to use up not only leftover rice, but leftover rice from the freezer – yes, you can freeze extra rice then take it out later to make tasty items like the following:

Dosas – Similar to a crepe, I enjoy this with a fish filling. Below is my recipe and here is a recipe from the New York Times that is likely more authentic but mine is a smidge easier.

2 cups white rice cooked very al dente – so simmer for 10 minutes then drain (or, if you’re me, you make way too much rice for some dinners and end up with it in Ziploc bags in the freezer, which works too).

Blend all of these in a food processor, then blend in water (or club soda if you have it) pouring in a stream until you have a batter that is similar to pancake batter in consistency. Let sit covered about 8 hours or overnight. Then cook on a hot pan as you would a crepe or thin pancake (the NYT article explains how)

Appam – A second Keralan sort-of-pancake / sort-of-crepe that can use up extra rice. Here’s one basic recipe. This recipe suggests using poha (pressed rice) for one of the ingredients, and that is available at Gagan’s – it adds a new dimension to the texture. Another way to do this is to add very stale bread crumbs to the batter.

If you want to find about about future Culture & Cuisine events at Beth Jacob Synagogue go to http://www.bethjacobvt.org 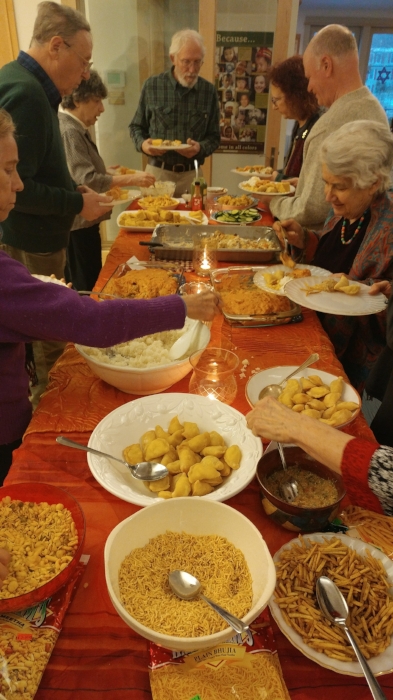